You were 530 days late, Francis Rossi. Was it worth the wait? Absolutely. I had booked VIP Meet and Greet tickets for my husband and I to see Francis Rossi at the Corn Exchange in Stamford, last March.

Yesterday, the event happened. The Meet and Greet started early. It was brilliantly organised by the staff and volunteers and Francis’s team. With our VIP lanyards on, armed with a fabulous glossy photo we went into the holding area. When it was our turn we walked through to meet Francis.

And we sat and stood across the table from him, to one side of his fabulous green guitar, (don’t ask me what sort of guitar it is, it was green, and it was lovely. As was he). 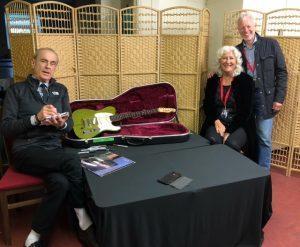 We were supposed to have a quick signing of photos, and a photograph with him, but I wasn’t going  to pass up the opportunity to first of all ask him if he’d received the letter I wrote him last year. I’d written all about when I met him and Rick Parfitt at Top of the Pops in May 1982 and how kind they’d been to a somewhat overconfident 15 year old who didn’t really know who Status Quo  were. Anyway, that’s another whole story and you can read the blog, ‘When kindness is the Status Quo’  on our website. Francis said, ‘I don’t think I got the letter’. I said, ‘I’ll write again’, he said, ‘No need, you’ve told me the story now’, with a glint in his eye. He was kind enough to also sign an autograph for our friend Eduardo in Brazil, who is a huge fan, but obviously couldn’t travel over here for this tour. 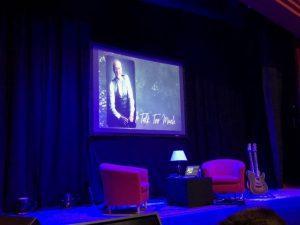 It was an evening called ‘I Talk Too Much’ based on Francis’s life and his book, and it was one of the most entertaining evenings I’ve spent in a long, long time.

He was witty, charming, even mentioned me. He said, ‘I met a lady earlier, who told me that when she was 15, Rick and I were very kind to her outside Top of the Pops. These days, she’d have sued us!’, again with a glint in his eye. I was a little bit embarrassed to be honest but it was nice to get a mention.

He told stories of his childhood, as part of an extended Italian family; talked about ice cream vans on the drive, about his school days and how he met Alan Lancaster and aspired to be like him. He talked about how Rick Parfitt stood in front of the band in a silver suit, at Butlins in Minehead; and how later on Rick Parfitt had said I want to be in that band. And of course he did get to be in the band.  Francis talked with emotion and eloquence about Rick’s illness, and his death. And in amongst all the stories, he played his guitar and sang for us.

It was a full house at Stamford Corn Exchange. You could sense the joy, anticipation and excitement in the audience even before the evening began. And the laughter, the applause, the cheering was a joy to behold. Francis has dozens of these evenings to do on his tour. I don’t know how he finds the energy to get on stage. Night after night. But of course he’s a professional, this is what he does. And boy does he do it well. Thank you to everyone who made the evening such a success.

Here’s to live music, and here’s to meeting your heroes in the hope they’ll be just as kind as you’d want them to be. And he is.