Simi Gandhi-Whitaker (Director of Connected Workspace, Mitie) welcomed the audience and raised the challenges of “bringing tech and data together to drive strategic decisions.”

Liz Kentish continued the theme as Facilitator, posing the question about “how do we harmonize technology?” Before suggesting that “digital and analogue technologies can happily co-exist.” She introduced the first Speaker, John Raspin (Partner & Director, Frost & Sullivan).

What Tech Tools are Driving the Future of the Workplace?

John opened by revealing that recent proprietary research indicates that the biggest challenge companies face is staff retention, over others such as operational excellence and technical optimisation.

He believes that “FM has reached a tipping point, moving from being expected to simply solve problems to demonstrating the role technology plays to move towards positive outcomes and adding value.” He highlighted the importance of starting with the outcomes in mind.

He shared the top 10 high impact megatrends, including robotics, automation and the mobility revolution, before explaining the innovation areas beyond 2022 such as the Internet Of Things and the Metaverse.

Understanding your problem and understanding the Tech – a marriage made in heaven or not?

Sam Clarke (CEO, Conjure) began by explaining the importance of truly understanding the data first before making a decision. He gave a fascinating example from World War Two, when Abraham Wald was asked to determine where to place armour on Allied bombers, to help them survive. He analysed the bullet hole patterns on returning bombers. 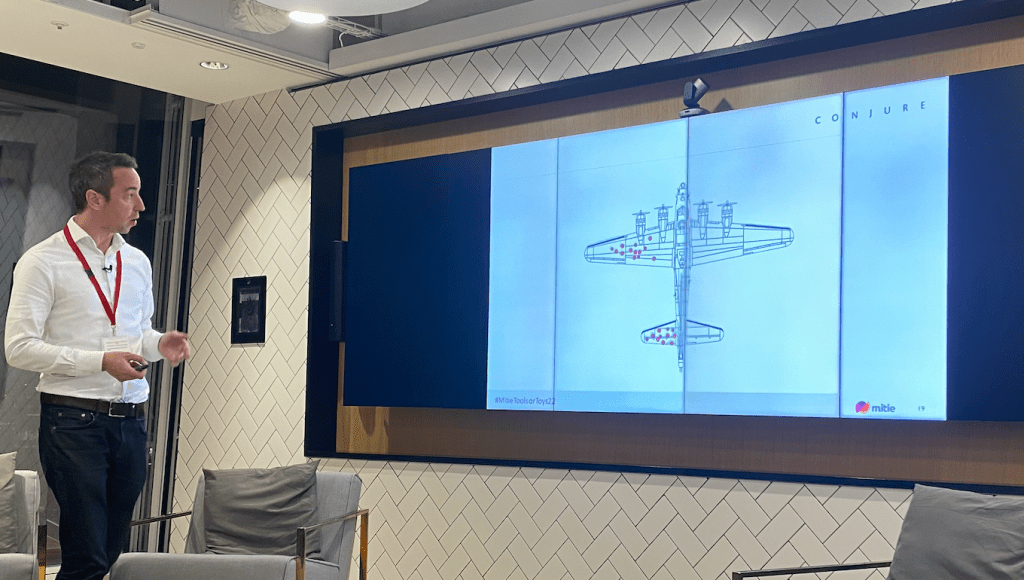 Sam then gave several real world examples of where technology was chasing a solution, as opposed to investing time in understanding the user challenges. “Just because you can do something doesn’t mean that you should.”

He closed with an innovative example of a Personal Digital Assistant that can follow a user from place to place, from the office to home, and points in between.

Liz then introduced the panel for the Debate: ‘Tech: Tools or Toys?’

Panelists were from Hark, Electronic Arts, IBM and Microsoft and the debate was facilitated by Cijo Joseph, Mitie CTIO.

Phil Bentley (CEO, Mitie) made some thought-provoking remarks including the power of asking “is it a workspace worth a commute?” He explained what drives Mitie, including the genuine effort to show their staff that they care, so the staff can deliver their best every day.

And lastly, “the importance of managing your own energy and the energy of those around you. With energy comes ideas and with ideas come opportunities.” Well said!

What do you think? Please leave a comment below.